ABCey Named one of the Best Event Planners in SF!

ABCey was recently honored by SocialTables as one of the top event planners in San Francisco! We couldn’t be more proud! We work hard to put on the best events possible and we are so thankful for the recognition.

“ABCey Events strive to be innovative by building magically interactive environments that bring your brand to life and create meaningful, joyful, and socially engaging experiences. Their love for technology ensures that your event will be fresh and exciting.”

This year, we’ve had the pleasure to put on some big events, like the Blackjet Launch Party in Union Square, and are excited to work on more! On Valentine’s Day, ABCey had the pleasure of producing the BlackJet San Francisco Launch Party in Union Square! If you’re not familiar with BlackJet, think of it as the “Uber for Private Jets.” It’s an online service and phone app that connects travelers with the reliability and convenience of a private jet with prices close to that of premium commercial carriers.

With a line winding down the red carpet and around the corner from Union Square before the event even started, it’s safe to say that attendees were very excited about BlackJet’s San Francisco launch. The first 1,000 people to arrive were given a free membership with companion seat –a coveted gift, seeing as the service is currently invite only and memberships are worth a whopping $2,500!

After receiving their sleek black membership card and vacation-reminiscent Hawaiian lei, guests had the opportunity to take a picture with the beautiful Sky Angels in front of the BlackJet logo or at the aviation-inspired Snapfiesta photobooth. DJ David Carvalho kept the crowd pumped with excitement while guests anxiously awaited the announcement of the Las Vegas trip winners; two of which were picked from radio station contests, one that was picked from a drawing done that day. The lucky winners were sent off to Vegas via Uber that very evening to enjoy their 3 night stay at the Bellagio and their $1,000 cash…all part of the GrandPrize win!

ABCey was live tweeting during the entire event and any posts & pictures using #BlackJetSFLaunch showed up on our Twitter Feed projected on a giant LCD in the middle of Union Square. A big Thank You to CEO and COO, Dean Rotchin and Joe Grimes for partnering with ABCey to kick off BlackJet’s new SF service route. Some of the key investors and co-founders such as Garrett Camp, Shervin Pishevar, and Steve Jang also came out for the event and took part in the fun. Thanks to all for coming!

Let us know what you thought of our event in the comments below or on Facebook & Twitter!

BlackJet, already dubbed the “Uber for Private Jets” is an online service and phone app that connects travelers with the reliability and convenience of a private jet experience  at prices commensurate with premium commercial carriers. Recently featured in TechCrunch, BlackJet aims to revolutionize private and charter air travel to become “the world’s cheapest, easiest way to book private jet service.” The startup is backed by Garrett Camp, founding CEO of StumbleUpon and co-founder of Uber, and has an all-star list of investors including Salesforce CEO Marc Benioff, First Round Capital, Shervin Pishevar, SV Angel, Ashton Kutcher, Guy Oseary, Tim Ferriss, Steve Jang and more. 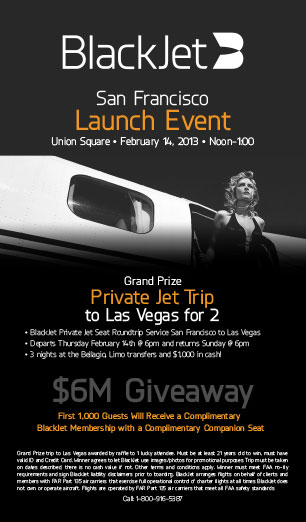 Thursday’s launch will feature a $6M Giveaway including 1,000 comped memberships (first 1,000 to arrive) with a complimentary companion seat to any BlackJet destination. One lucky Grand Prize winner will receive Roundtrip Private Jet Seat Service to Las Vegas for two leaving just post contest on Thursday and returning on Sunday. The winners will also be comped a 3 nights stay at the acclaimed Bellagio hotel along with $1000 in cash. How’s that for a Valentine’s Day gift for your special someone? Local SF fave dj David Carvalho will playing some lunchtime beats, so come on down and get your free membership along with your photo taken in our aviation themed digital photobooth!

BlackJet is currently invite-only, but ABCey has got the hookup –  you can login to their site with the code forbesvip300. What do you think of BlackJet? Let us know if we’ll be seeing you at the launch in the comments below or on Facebook & Twitter!